Why Winning Ratio Means Nothing

A lot of options traders consider 90% probability strategies a Holy Grail of trading. After all, if you can win 90% of the time, you should be able to grow your account very quickly, right? Well, not only this is not true, but in fact, winning ratio alone tells you NOTHING about your chances to be profitable.

The winning ratio is simply the number of winning trades divided by the total number of trades. For example, a trader who won on 15 of 20 trades would have a 75% winning ratio.

When you sell a credit spread with short deltas around 10, they have approximately 90% probability to expire worthless, so theoretically, you have a chance to have a 90% winning ratio.

Here is the problem: when you have a 90% probability trade, your risk/reward is terrible - usually around 1:9, meaning that you risk $9 to make $1. Also with 90% probability trades, your maximum gain is usually limited to 8-10%, but your loss can be 100%. That means that you can have 90% winning ratio, and still lose money. Also consider the fact that if you win 10% five times in a raw and then lose 50%, you are not back to even. You are down 25%.

In the example image below, we can see that even with a 90% winning percentage, a trader can still lose money if they take losses that are too large relative to their winners: 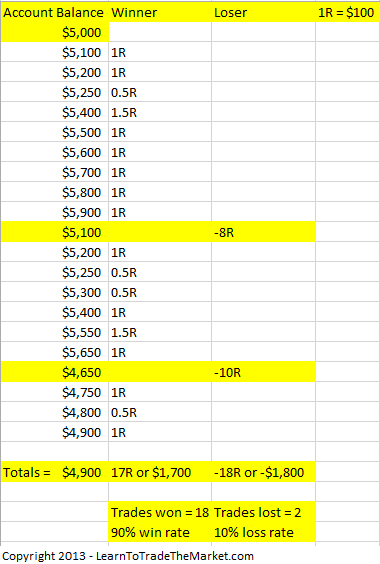 It should be obvious by now that winning ratio alone doesn't tell the whole picture - in fact, it is pretty meaningless.

Does it mean that credit spreads are a bad strategy? Not at all. But considering winning ratio alone to evaluate a strategy is not a smart thing to do.

On the other side of the spectrum are traders who completely dismiss credit spreads due to their terrible risk/reward ratio. Here is an extract from an article by popular options guru:

"The truth is that OTM Credit Spreads have a high probability of making a profit. The average Credit Spread trader will face 100% losses on this trade several times a year while trying to make a modest 5 to 10% a month. What happens is that eventually most Credit Spread Traders meet their doomsday. Sooner or later, virtually all option traders who use only OTM Credit Spreads wipe out their trading accounts.

Let’s look at the “Computer Glitch” of 2010 when the DOW dropped 1000 points in a matter of minutes. Those doing Credit Spreads on this day lost on average between 70% and 90% of their portfolio. What happened is that the volatility rose drastically and the trades moved into that “danger zone” where they lose 100% 10 percent of the time. The Credit Spread trader doesn’t realize that the 10 percent of the time they lose can happen AT ANY TIME. Most people think that they will have 9 wins followed by 1 loss, but this obviously is not how the law of probability works. It’s not uncommon for an OTM Credit Spread trader to face a catastrophic loss on their very first trade, and once this happens, there is no way to recover since a winning trade will only bring back 10% on the remaining capital."

This article ignores few important factors. It is true that credit spreads can experience catastrophic losses from time to time. But this is where position sizing comes into play. Personally, I would never place more than 15-20% of my options account into credit spreads - unless they are hedged with put debit spreads and/or puts. This is what we do in our Steady Condors portfolio.

Many professional traders consider 60% winning ratio excellent. Peter Brandt admits that his winning ratio is only 43% - yet his Audited annual ROR is 41.6%. Many strategies are designed to have few big winners and many small losers.

The bottom line: the only thing that matters in trading is your average return per trade, not the winning ratio.