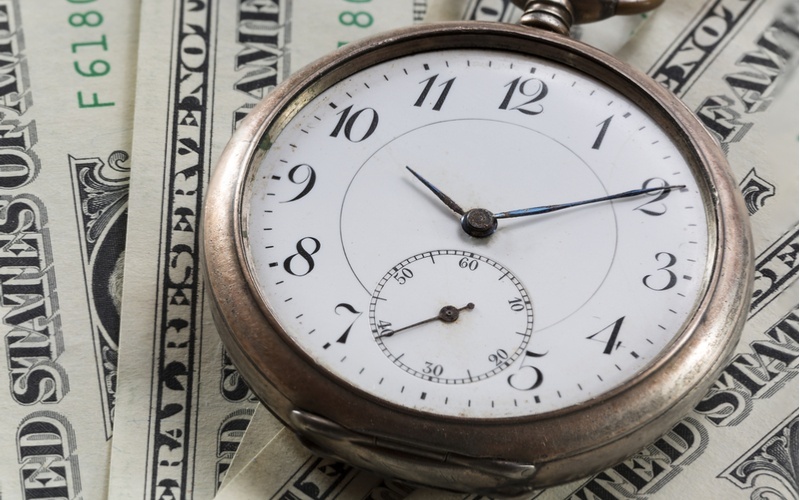 Exactly how risky are uncovered calls? That depends … Some traders avoid uncovered calls altogether because the risk can be significant, even unlimited (in theory). Others can rationalize this strategy as only moderately risky based on how you pick expiration and strike.

You can build in a buffer zone to protect against exercise and monitor the position every day to ensure that no surprises occur. But is this safe?

The market risk cannot be ignored, but to some extent, it can be controlled. For example, in a high-priced stock like amazon.com, a wide range of strikes set up a flexible method for using uncovered calls. As of the close of May 17, 2019, AMZN closed at $1,869 per share and had fallen 38.57 points since the previous day. Given this point range, how safe (or risky) would it be to open an uncovered calls with a 50-point buffer zone? Focusing on the strikes of 1,920 (50 points above the closing price), can a “reasonable” risk level be established?

As a first point to be made, the collateral requirement for an uncovered 1,920 strike is 20% of strike value, or $38,400 (minus the premium received for selling the call). This high collateral level should be kept in mind when evaluating the rationale for an uncovered call.

Looking at the AMZN chart for the May 17 close, it appears that price has been in a gradually increasing channel of about 225 points. This is a broad range, but given the price level of $1,869 per share, this trading range does not seem extreme. But for the uncovered call, are there opportunities here? The chart reveals the typical trading range as well as the potential range of price movement in single sessions. 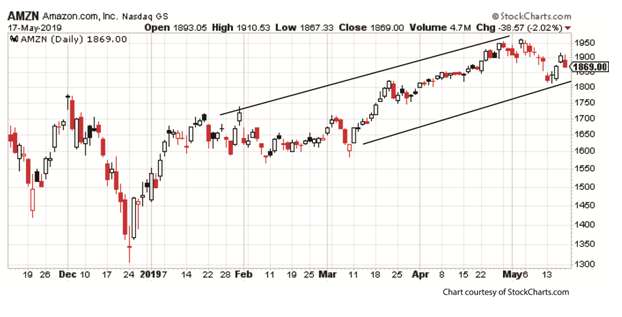 What you see here is what at first glance is a low level of volatility in the last three to four months. Based just on this, would it make sense to open a short-term uncovered call?

Looking at the one-week and two-week calls with a 50-point buffer, we find:

The rationale for the uncovered call is: With protection of either 57 points or 63.60 points, we may expect time decay to move rapidly. Profits will accumulate as a result, and if the underlying price moves against the position, the buffer zone allows us to buy to close the position without the uncovered call moving in the money.

This is a neat and tidy idea, and it is appealing to the logic a trader would enjoy in this situation. The buffer zone protects the position from exercise, and time decay ensures that the call is unlikely to  move suddenly in the money.

But is this a logical assumption?

Between December and February on the chart, the daily breadth of trading for AMAN was greater than 50 points on about 10 sessions. Although volatility more recently has been lower, there have been incidents on 50-points or more moves in a single day. This occurred most recently on May 13, for example.

This means that even with the buffer zone and favorable rate of time decay, the strategy can go south in a hurry. You have t ask yourself whether the exposure is worth the risk. For premium of only $600 (7-day) or $1,260 (14-day), are you willing to hold an open short call that could be exercised if the underlying price moved rapidly in a single day?

The exposure could be suitable for some traders, but not for most. An alternative would be to open uncovered puts. These are lower-risk even though the market risk is the same as that of a covered call. Unlike the uncovered call with unlimited upside risks, the uncovered put has limited possible risks on the downside and can be rolled forward to avoid exercise. But just as the price of AMZN can move up 50 points or move, it can just as easily and unexpectedly move down.

The 50-point buffer is slightly more favorable for uncovered puts than for uncovered calls. The following premium values were found:

The same analysis of risk must be applied to make a sound judgment about the risk in this position. Both the uncovered call and the uncovered put look reasonable given rapid time decay, buffer zone, and short term remaining until expiration. But the possibility of a 50-point move (or more) in one day adds risk to the strategy in both cases.