Most options traders are aware of the definition of risk for strategies. For example, a covered call is low-risk and an uncovered call is high-risk.  While not recommending that everyone run out and open uncovered call options, a point worth making is that these “universal” definitions are not always reliable.

There are times, for example, when uncovered calls are not as high-risk as they are at other times. Risk itself is a variable, and some conditions invite a reevaluation of the risk picture.

Consider the case of Netflix as of January 26, 2018. The company reported huge growth in the fourth quarter, 2017 in subscribers, both domestically and internationally. The stock price jumped about 30 points on January 23 and ended up above the upper Bollinger Band. (When prices move above this level, which is two standard deviations above the middle price, the expectation is that price will return to the range below upper band, usually very quickly.

However, the price remained above upper band for four sessions. By January 26, price had risen above $269, or 48 points higher than price levels only five days earlier. During the past six months, price had gone above on occasion, but never stayed there for this long.

With this unusual situation in mind, a retracement of price is very likely. This forecast is confirmed by the highlighted volume spike on January 23 and by Relative Strength Index (RSI), revealing the index on January 26 at 88.74, or 18.74 points above the overbought level of 70.

These signals predict a price decline, and with that in mind, many traders would look at long puts. For example, as of January 26 about 30 minutes into the trading day, with price at $269.57, the 7-day 270 put was at an ask of 6.25. Assuming a $5 trading fee, buying this long put will cost about $630, and breakeven is $263.70. With only one week to go, time decay will be rapid. In fact, on average, options expiring in one week tend to lose 34% of remaining time value between Friday and Monday. The long put is of questionable value. 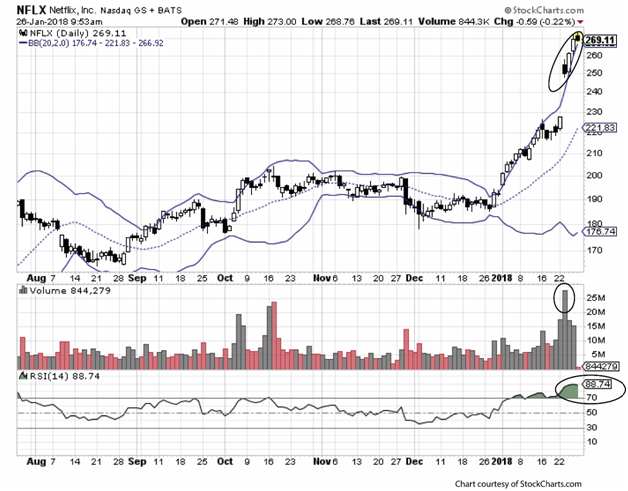 In comparison, an uncovered call option expiring in one week at the strike price of 275 could be sold at a bid of 370, netting about $365. The risk here is that the price will continue rising and the call could end up in the money. But with a five-point buffer between current price and the uncovered call’s strike, the risk level is quite low. Adding the $365 premium, total buffer zone is about 8.65 points. And time decay will be falling rapidly over the week.

With the technical signals supporting a high likelihood of retracement, what are the chances that this stock price will rise another five points? Just based on the price above upper Bollinger Band, it is very unlikely. Adding in the volume spike and excessively high index of momentum (RSI), the uncovered call does not look especially risky. Further confirmation was seen in the candlesticks for the last two days. The white session is followed by the latest day opening higher and retreating to within the range of the previous day. This forms a bearish piercing lines signal (also called a dark cloud cover). By itself, this is not significant; but as a confirmation of the rest of the bearish retracement signals, it only adds strength to the forecast.

Uncovered calls are high risk trades, without any doubt. But they are the highest risk when opened at the money; following a price decline; or when the underlying is exceptionally volatile. In the situation for Netflix, the unusual attribute of the stock price was the huge jump in a single day, gaping above the upper Bollinger Band. Alternatives to shorting calls include bearish vertical spreads, synthetic short stock, or calendar spreads. In other words, there are plenty of ways to trade a bearish situation, even one that is short-term in nature.

One final note: In opening an uncovered call, you are required to post collateral in your margin account equal to 20% of the strike value, minus premium received. In the example of a 275 short call, 20% is $5,500. A free margin calculator is provided by the CBOE and can be downloaded athttp://www.cboe.com/trading-tools/calculators/margin-calculator