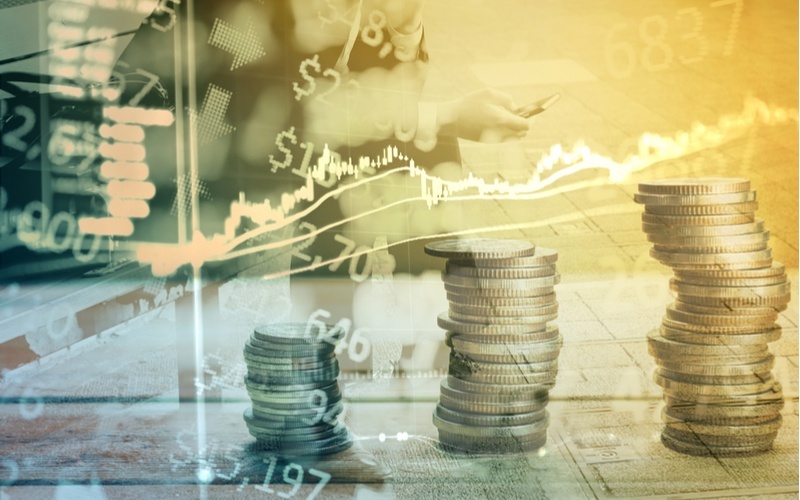 Just about every place I turn someone is spouting the use of covered calls or naked calls. The basic premise is one can pick up "easy money". Unfortunately, I'm aware that there is only so much one person can do to stop this insanity and I've tried in previous articles.

Before I get into "new ground" in this article, let me recap my basic objection to covered calls.


And the same can be said for individual stocks, such as any of the FAANG stocks. If the investor doesn't believe their selection will outperform a broad based, representative ETF, such as the Invesco QQQ NASDAQ ETF (QQQQ), then just go out and buy the ETF.


Now that leads to my dislike of covered calls. It is not based upon a conclusion that one can or can't make money. That's irrelevant. It's more of a logical argument than a statistical argument. Simply stated it is:


If one sells a call, then it makes sense to sell a call against an underlying that is least likely to be over-run rather than end up losing money


I won't go into this in the level of detail of my previous article other than to suggest that one sell a call against an index or index based ETF rather than the specific stock the investor has so carefully chosen and expects to outperform the index.

But enough of "old news". Let's turn our attention to more fertile ground. A "different" approach to selling calls, covered, naked or otherwise.


Let's say one wants to sell a call against the SPDR S&P 500 ETF (SPY). The first step one takes is to select the applicable strike and expiry. As I write this SPY is trading around $270.5 and let's say I'm considering selling a monthly call 1% out-of-the-money. So, I look at the November 16th expiry and a strike of $273.5. Not quite a month and not quite 1%, but we're talking concept here. After all, who knows where SPY will be when you actually read this.


But before we get into specifics, I must stress that I'm using current option prices when volatility is relatively elevated. This means that any example will look a little more dramatic than it might when volatility is more normal. Additionally, I would be hesitant to sell a call after a recent , big drop ... preferring after a big rise ... but that's another story.


Now the results of this strategy are pretty easy to understand. If SPY goes down or up no higher than $273.50 then one pockets the premium of $3.60.


Now for SPY to go from its current price of $270.50 to $277.10 would represent a rise of slightly less than 2.5%. That, quite simply, is the gamble. In the particular market we face, today, that might be a losing gamble, but that's the gamble one takes.

There are multiple possible tweaks, but I'll just detail two of them. Both designed to effect a slightly different result. I suggest each reader "play" with the idea to find their comfort level and what matches their objectives. Here goes:

Now, for purposes of the "tweak" I want to improve upon the results of a simple covered call that produces $3.60 of premium at a strike of $273.50. That goal will determine the strikes for both legs.


Now, what if SPY rises? Well, we are still working with a net credit of $ 3.52. However, if SPY lands anywhere below the two short calls at $271.50, the long call goes further ITM increasing the gains.


If SPY rises above $273.50, the position is net short and one starts to lose the $3.52 initial credit. I SPY goes as high as $277.02, then all is lost and one ends up a loser on rises above that level. But here's the key ... they lose, but they lose no more than they would have lost on a simple covered call or naked call.


So, the result is pretty simple. The "tweak #1" will outperform a simple covered call if SPY lands anywhere from $269.50 to $273.50 and equal (minus 8 cents) the covered call on all other situations up or down.


Perhaps a graphical representation would be helpful: 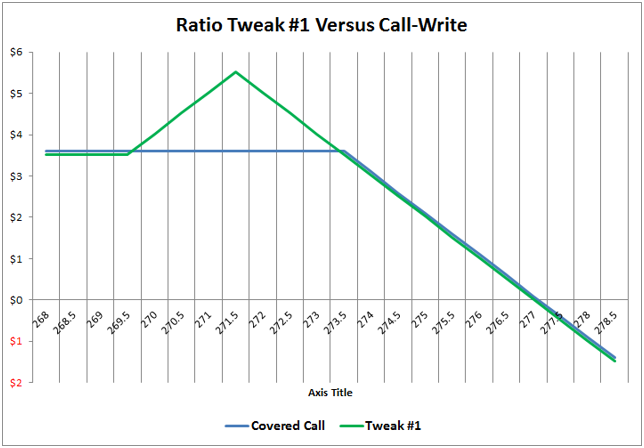 The concept is the same only the objective is slightly different. Instead of trying  to make additional gains on advances up to the covered call strike of $$273.50, we can look to raise the break-even and loss points. So...


Here's how it looks when compared to a simple call-write and tweak #1. 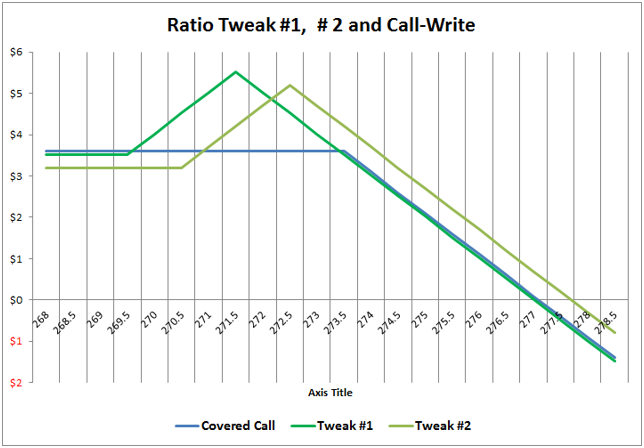 With a little bit of imagination and some work one can easily find alternatives to the simple call-write .. whether the call-write is covered or naked.


I've illustrated two ratio tweaks to point out how one can tailor the outcome to meet almost any objective.


The first tweak had, as an objective, to make more if SPY didn't reach the strike point. Tweak #2 was designed to raise strike point to lesson the chances of being over-run.


Both tweaks gave up a slight bit on the lower end, but that's not a result of any inherent disadvantage. it is a result of the fact that SPY option strikes are in 1/2 dollar increments and the best one can do is get close.


There are infinite possibilities one just needs to be willing to put on a thinking cap and find what fits them.


The important thing to take away from this is  ... before ... one writes a simple call ... look at the ratio spreads and determine if there's a spread that can give you a little more than "plain vanilla". In most cases it will.