Making money in the stock market in 2017 was easy. Pick almost any stock or index. Buy calls. Sell put credit spreads. Almost any bullish or slightly bullish strategy would work. Everyone was a genius trader. Then came 2018. US stocks posted its worst year in a decade. Volatility exploded.

The graph below highlights the fact that while less than 2% of assets were negative in 2017, 90% of assets are negative YTD in 2018 -- they highest percentage since... ever. 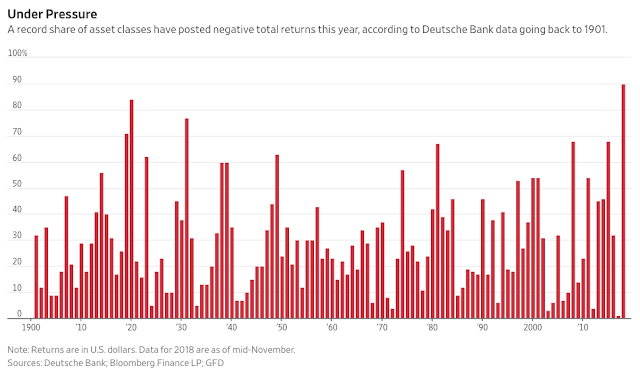 2018 was a unique year in many areas. For example, 2018 was the only positive year for  VXX  since inception. On Monday, February 5, the Dow Jones Industrial Average declined by 1,175 points — its largest point drop in one day ever. VIX more than doubled in a single day — for the first time ever. The VelocityShares Daily Inverse VIX Short-Term exchange-traded note (XIV), a product issued by Credit Suisse, and the ProShares Short VIX Short-Term Futures exchange-traded fund (SVXY), both plunged by 80 percent in the hours after the VIX’s spike.

Those unprecedented events caused many funds to blow up their clients accounts. We covered the The Spectacular Fall Of LJM Preservation And Growth and James Cordier: Another Options Selling Firm Goes Bust, among others.

Many investors also learned in 2018 that “Blue Chip” is a marketing term. Owning these stocks will not shield you from losses. For example, IBM’s share price finished 25.6% lower in 2018, and it is one of many blue chip stocks that were punished by the market in 2018.

Some of the previous market darlings have been also punished hard in 2018. Facebook ended the year 25 percent down for 2018, and Apple was down 7 percent.

There was virtually no place to hide in 2018.

As Charlie Bilello mentions, in 2018, more than any year in recent history, the overwhelming majority of asset classes are down. In the table below of 15 asset classes ranging from stocks to bonds to REITs to Gold and Commodities, only one is higher: Cash.

If you maintain a globally diversified portfolio, this has likely been the worst year for you since 2008, with a 60/40 portfolio (AOR ETF) down just over 6%.

During periods like 2018, many traders started to realize that incorporating options strategies into their portfolios might be not a bad idea. Here is how our strategies performed in 2018:

2018 was a wake-up call for a whole new generation of investors who entered the stock market after 2009 and watched their long portfolios going up year after year. As we have seen, the markets can go down as well. And when they do, you are better to be prepared. This might be just the beginning.