Is Your Iron Condor Really Protected?

Iron Condor is a very popular strategy used by many options traders. It can perform very well many months, but the real question is: how much will you lose when the market volatility explodes? Many condor traders give back all of their profits during the 2-3 losing months each year when the markets make large moves because they lack a detailed plan for risk management.

Why Steady Condors is different?

Can you make 10% per month with Iron Condors? Yes, you can - but this is a wrong question to ask. The right question is how much you lose when the market goes against you?

Steady Condors at its core is managed by the Greeks but mostly resembles a variation of iron condors. Anyone who has traded more than a handful of non-directional iron condors knows they can be extremely challenging in a trending market potentially causing a lot of stress, large drawdowns, and significant losses.

Our manage by the Greeks philosophy is designed to take advantage of the volatility skew that naturally exists in index options like RUT and SPX and to deal with the inherent flaws this creates for traditional condors. We all know that the market “takes the stairs up and the elevator down” and this is built into index options pricing. For condors this means that you will be able to sell much farther OTM puts than calls for the equivalent premium. This causes a traditional iron condor to naturally set up short Delta (bearish). If the market makes a move up after trade launch you will start to lose money immediately even with declining implied volatility typically helping your short Vega position.

We certainly saw plenty of upside in the recent years.  But as we all know, the market tends to take the stairs up and the elevator down.  Steady Condors is short Vega, and I thought it would be a good example to show the backtested example of the Steady Condors trade during the August 2011 correction/crash. 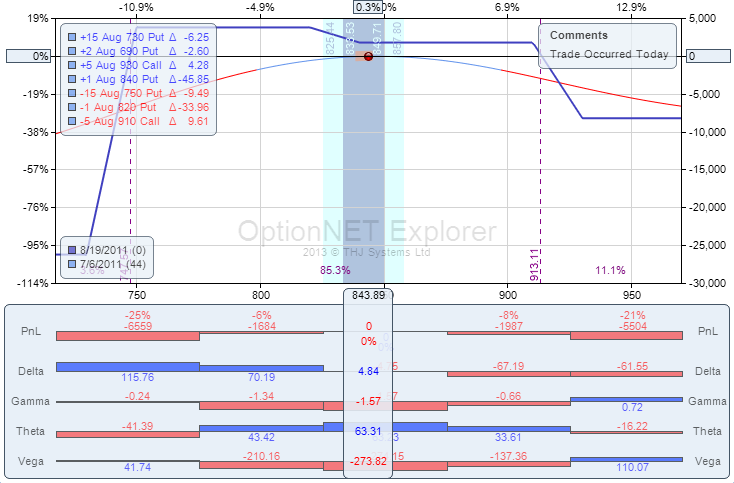 No adjustments were necessary until 8 days into the trade when RUT was at 832.  Interesting though was RUT had first moved up to nearly 860 before starting its descent.  The short leg of the put debit spread was rolled down 20 points. Business as usual. 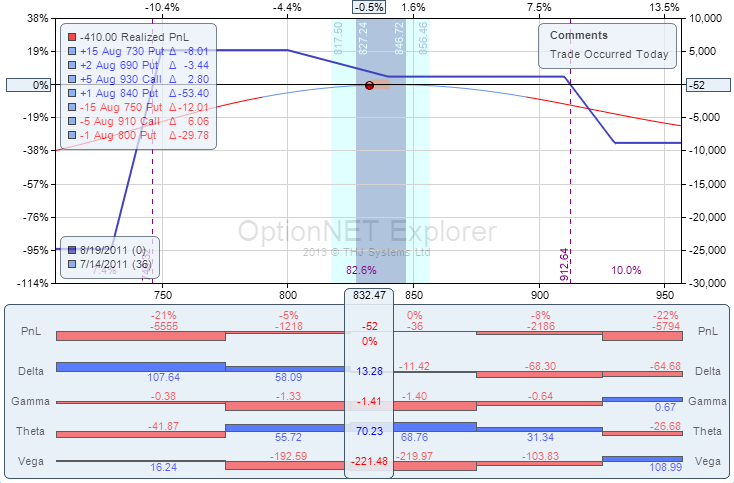 On July 18, 32 DTE and 12 DIT, another debit spread was added (one other had also been added a few days prior) and the call credit spreads were taken off for 20 cents. RUT at 816, down about 1 standard deviation since entering the trade.  Being down 1 standard deviation in 12 days isn't necessarily concerning, but RUT has declined over 40 points from its high.  PnL is in good shape, up about 1%. 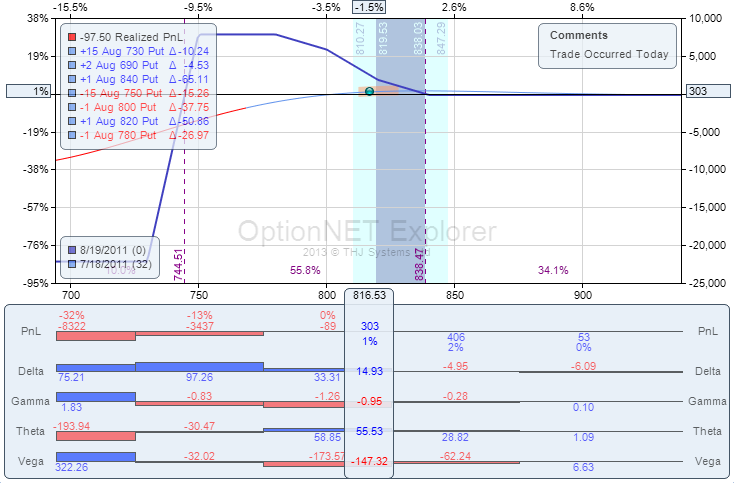 On July 27, 21 DIT, RUT is at 806 and another debit spread is added (rolling down the 800 short to 780). At this point the move down is still reasonable (around 1 standard deviation after 21 days).  PnL is in good shape up about 2% at this point.  The debit spread adjustments are causing the trade to look more like a bearish butterfly than a condor.  No additional long puts have been necessary yet at this point. 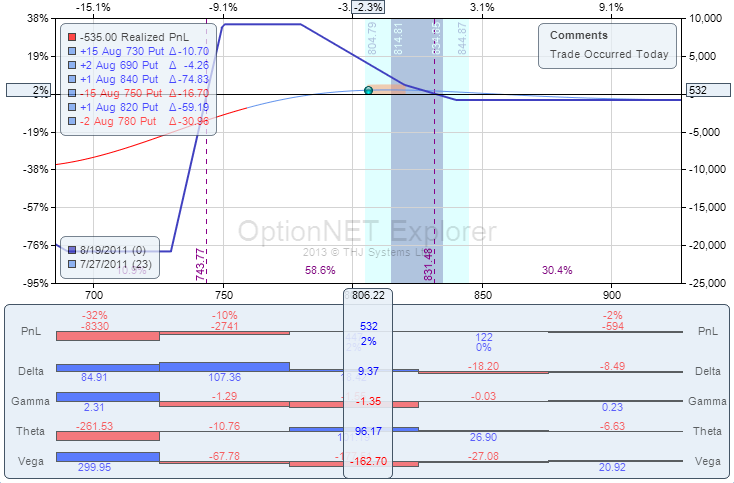 Skipping ahead to Aug 2, 27 DIT and 17 DTE, RUT is now at 783.  A few more debit spreads have been added at this point.  The idea is to simply keep managing position delta as RUT moves further down.  PnL is in great shape, closing in on target profit, up close to 4%.  In situations like this I will consider going for more profit because it's possible to make significantly higher returns when the trade finishes under the "wing".  One or two months per year we can usually get 5%+ out of the MIC. 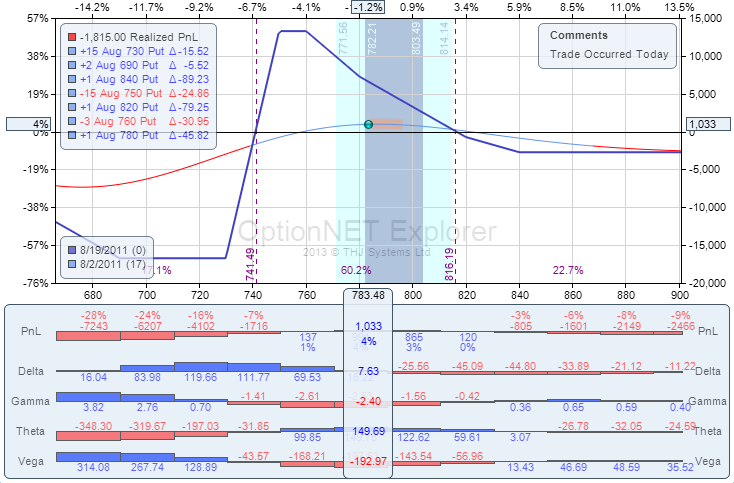 Later in the day on Aug 2 position delta reached the adjustment target again so at this point a long put was added.  Rational for the long put (compared to yet another debit spread) was as follows...1. There is more than enough potential profit and theta in the trade 2. This was the second adjustment in the same day with the daily move over 1.5 SD 3. RUT has moved down 66 points since trade launch and 82 points since the high. 4. The short leg of the put credit spreads are now carrying a delta of 30 increasing the short gamma of the position. 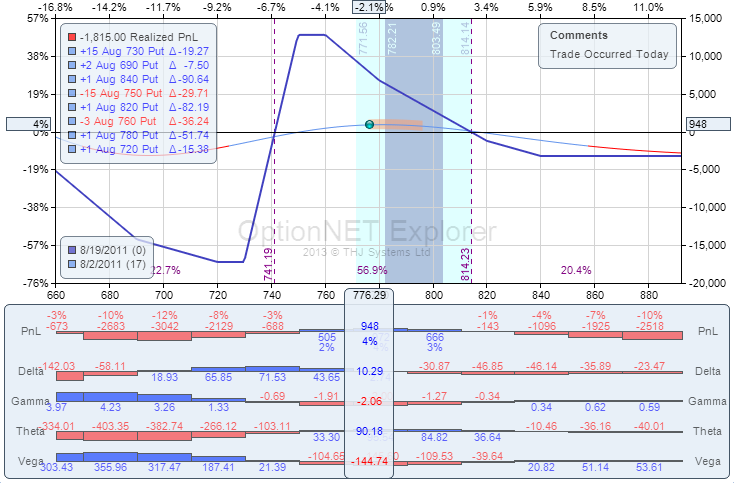 One day later on Aug 3 another long put was needed.  It would certainly be reasonable to take profits at this point, the key is to keep the t+0 line as flat as possible while maintaining as much theta as possible.  Note how flat the t+0 line is, and also how it curves up if a serious crash would occur.  Translation: minimal fear of additional downside. 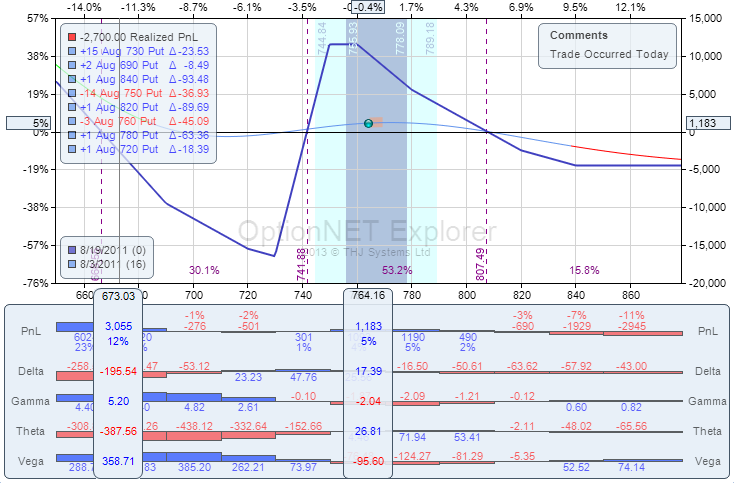 One day later on Aug 4 with RUT at 752 the trade was taken off for target profit of 5% and because RUT touched the short put strike, and theta was now negative. IV had increased 56% in the 29 DIT and the total move represented over 2 standard deviations.  Max margin at the beginning of the trade was just over $26,000, and by the end of the trade margin was down to less than $17,000. 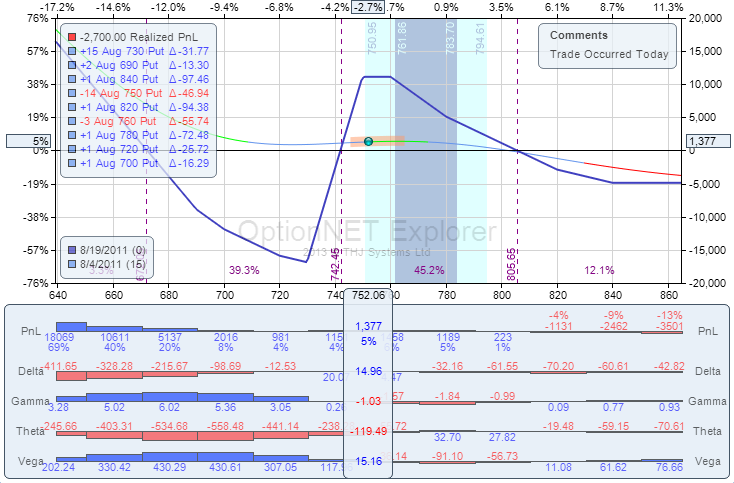 Just to show the power of risk management, the next picture is the original trade with no adjustments.  Although the setup is important, it's the adjustments that make the difference.  Without them, the trade would have been down 22% at the point it was taken off for target profit. 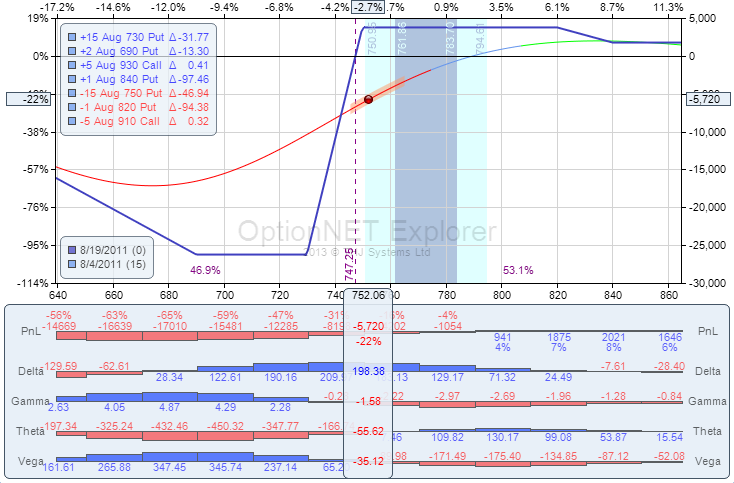 One last interesting point...On Monday Aug 8 RUT closed down 64 points at 650.  If you wouldn't have taken the trade off on the 4th the trade would actually have been up 67% at the end of the day on the 8th. 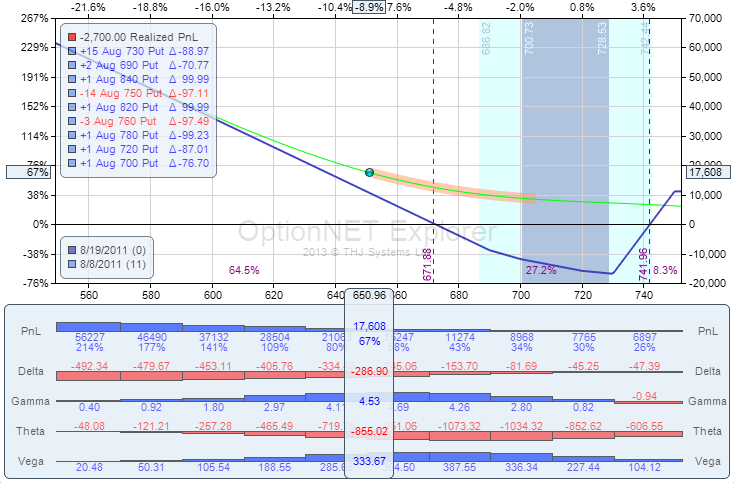 Frankly I'm not familiar with another variation of Iron Condor that can actually make a gain after the index declines by 11%+.

Note: our current setup is slightly different, but the general principle is very similar.