Karen The Supertrader: Too Good To Be True?

My Karen Supertrader: Myth Or Reality? article provided a different angle about this "superhero" created by tastytrade. As a reminder, tastytrade promoted her as OPTION TRADER makes $105MM PROFIT in the NDX, SPX & RUT. Now Karen Bruton the Supertrader is being investigated by the SEC for fraud.

What lessons we can learn from this debacle?

Were the Skeptics Right?

"Self-taught options trader Karen Bruton (aka Karen the Supertrader) earned so much so quickly that some skeptics doubted her. In reality, the SEC says, she improperly concealed more than $50 million of losses."

The new allegations paint a very un-uber portrait of Bruton, 66, a self-taught options trader who mesmerized fans and flummoxed skeptics with her life story of parlaying a $10,000 initial investment into a fortune and seemingly endless stream of profits.

I'm still trying to understand the motives of tastytrade when they promoted her as making $105MM PROFIT, without properly discussing the risks. They also failed to mention that most of the growth in her fund came from  new money and not actual profits. Was it extreme ignorance or some hidden agenda? You decide.

As a reminder, Karen claimed to make 25-30% per year by selling naked options on indexes.

The important point is this:

As I mentioned in my article, there is only one way to make 25-30% per year with this strategy: leverage. Combine leverage with naked strangle strategy which is very risky to begin with is a certain path to financial disaster.

Leverage Can Kill You!

Our contributor Jesse wrote over a year ago:

"All trading has risk. It's not the strategy that determines if something is risky...it's the position size (amount of leverage) and risk management that does (and then the discipline of the trader to follow the plan which often means taking a pre-defined loss before it gets out of control)."

"The point here is not to dismiss all volatility and option selling strategies as useless and blow up prone. The short volatility trade on equity indices is one of the best trades out there. It does very well long-term. "

The point is to understand your risk. In fact, be obsessed with risk management if you want to survive as a trader for the long term. 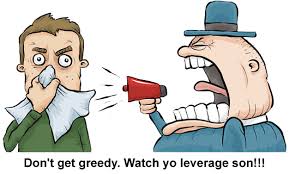 To add insult to injury, Karen Bruton also started to hide the losses by rolling options positions, as explained here:

"Between October and December of 2014, Karen took some heavy losses selling her options. But to keep the incentive fees coming in, she organized a sophisticated options roll at the end of each month. This allowed her to still “realize gains” of 1% every month to take fees from, while pushing unrealized losses out to the next month. Month after month the losses continued to snowball while she continued to collect her fees.

Each month began with a huge realized loss. (The SEC reports that these losses now exceed $50 million dollars.) She offset these accrued losses by selling a ton of in-the-money call options on the S&P 500 E-mini futures due to expire at the end of the month. This injected fresh cash into the fund. Just enough so that she could report a small realized gain to investors. That way she could take fees that month too…

But of course there’s no free lunch in trading. You don’t get gains out of nowhere. When these call options expired, yes she had her cash injection (from the option premium), but she was also left with a futures position (due to assignment) that carried a huge unrealized loss. Here’s where the loss rolling came in. She needed that futures position to stay open until the next month because if she closed it beforehand, that would realize a loss and cancel out the profits from the calls she sold. That means no incentive fees.

This all smells like a classic Ponzi scheme…Pay the old investors with money from the new ones." 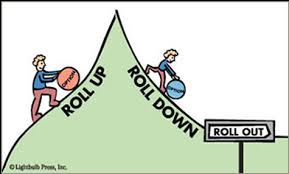 We are very familiar with those "rolling" techniques. Many options newsletters are using them to hide their losses. As we always said, rolling options position is simply hiding the loss.

The Hope Investments fund has been created in March 2011, and October 2014 was only the second time since creation when S&P declined more than 10%. First time (August 2011) she probably hasn't been using as much leverage yet. If the fund experienced such significant losses after 10% market decline, imagine what would happen in 2008-like environment.

SJ Options summed it up  nicely:

"It’s very important to alert the public of the true risks involved in short strangles because in the interviews the risk is not discussed as much as it should be.  Because of the excessive media exposure, there are many of retail traders attempting to trade this uncovered options strategy that has nearly unlimited risk potential. The short strangle is not as easy as it appears to be.  Margins change quickly and it’s vulnerable to quick losses and margin calls.  Be very careful with this strategy.  We conducted an 85 year backtest of the short strangle, 45 days to expiration, and it lost money overall."

Tom Sosnoff was asked to respond to Karen Bruton story after the SEC complaint. You can watch his response here (18 minute mark). He continues to defend her, calls her "a very special person" and a victim of an evil government. Tom calls all the publications about Karen "crap". He claims that Karen was actually not paid enough in her fund. However, according to the SEC complaint,  "Between November 2014 and March 2016, Hope collected over $6 million in incentive fees from the HI Fund. As of the same date, the HI Fund had unrealized losses of approximately $57 million." So she took $6M in illegal fees while the fund was down $57M, and Tom says that she was underpaid...

Sosnoff also continues to claim that Karen "made ton of money" for her investors. He still sticks to his claim that she turned $100k into $105M between 2008 and 2011, "forgetting" to mention that most of those profits came from new investors money. God knows his true motives, but this article from 2014 gives some insights into the whole "tastytrade/dough/TD Ameritrade" scheme.

Here are some articles about Karen SuperTrader: