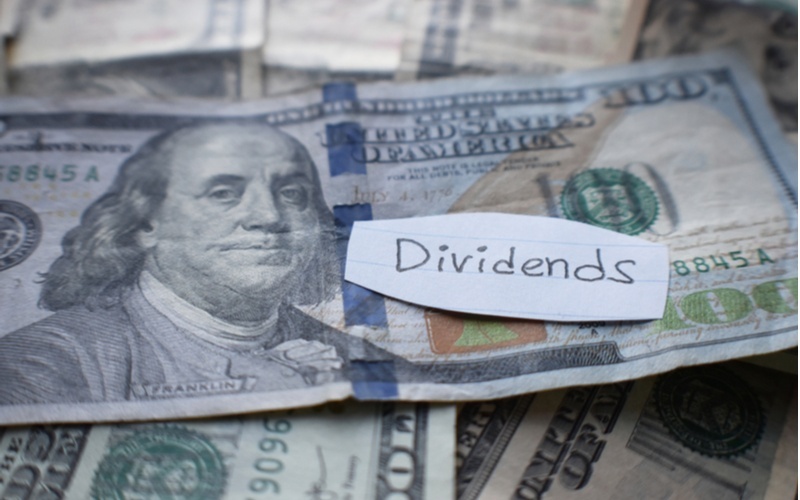 Dividend payments, like oatmeal, may be smooth or lumpy. Smooth dividends are predictable, usually once per quarter. It is easy for options traders to believe these dividends are guaranteed, because they usually continue uninterrupted quarter after quarter. This also makes it easy to predict total return over a longer time span.

But dividends are not guaranteed. A corporation can suspend or cancel dividends anytime it wants. This inevitably affects the value of shares and, as a related matter, the premium value and return on options. This can occur for many reasons, such as unexpected losses, weak cash flow, or a desire by management to create cash reserves rather than sharing profits with stockholders.

For anyone intent on calculating option returns, the uncertainties of dividend policy complicate any calculation. The original Black-Scholes pricing model (the most often cited of all models) is deeply flawed for many reasons, one of which is that dividends are not even part of the calculation. It was assumed (probably just for simplicity) that no dividend was paid on the underlying stock, thus no dividend return was made part of the return. Today, though, traders know this is just unrealistic. Such a large portion of all listed companies include dividends that it cannot just be ignored or overlooked. Among the many later adjustments to the pricing formula, attempts have included adding in dividends, but this just sets up another variable among numerous existing variables. If the calculated dividends end up being lumpy, it makes any price formula that much harder to figure out.

This only adds to the problem of trying to tie down any pricing of options to a reliable and definitive result. This attempt to predict dividends using a continuous dividend model (one in which today’s dividend will continue into future payments at the same rate). Adding to the variability of this is the tendency for dividend yields to be raised or lowered over time. It is rare for a dividend yield to remain unchanged over an indefinite timeframe, so even based on a continuous dividend model, it is elusive to try and estimate future yields. Even so, the continuous approach used for companies whose dividends have been steady over many quarters, may be preferable to use rather than trying to calculate lumpy dividends.

The more the dividend yield and timing of payments changes, the lumpier the dividend yield becomes, especially if adjusted to an annualized basis. Smaller companies relying on cash flow from one period to another are most likely to change dividend yield frequently and may even suspend the quarterly dividend altogether. This tendency reals that


The only way to manage a lumpy dividend schedule is to estimate future dividend dates and payments based on the past. This introduces a likelihood of greater error into dividend and option pricing, but it may be the best alternative. Considering the uncertainty in the entire questions, it is not realistic to expect to develop a method for accurately figure out option pricing base don lumpy dividends … or for that matter, in any circumstances.


Like all calculations of return, even taking variables into account will not ensure better accuracy. The dividend yield, declaration per share, and timing of both ex-dividend and payment dates, all add uncertainty. But another consideration is whether absolute accuracy matters. Because options often remain open for only a short period of time, the calculation of dividends might not be as important as many traders think.

An alternative to detailed calculations could involve the following steps:

This method is as imperfect as any other model, but it introduces a somewhat systematic attribute to the calculation. It is also affected by whether the open option is simply closed, or if the underlying security is closed as well through exercise. This adds yet another variable to the entire question.

One last point about lumpy dividends: Whenever payments of dividends are non-uniform (lumpy), the chances of early exercise appear to be greater, and early exercise premium relies not only on the most recently paid dividend, but also on the timing of previous lumpy dividends over the life of the option. [Valkanov, Rossen et al (August 2005). “Does the early exercise premium contain information about future underlying returns?” UCSD, p. 2 - https://rady.ucsd.edu/faculty/directory/valkanov/pub/docs/early-exercise-premium.pdf]

This means that the current variability of lumpy dividends does not occur in isolation but is likely to be part of a trend. That trend includes a higher risk of early exercise. This itself may represent the most important aspect of lumpy dividends.

Michael C. Thomsett is a widely published author with over 90 business and investing books, including the best-selling Getting Started in Options, now out in its 10th edition with the revised title Options. He also wrote the recently released The Mathematics of Options. Thomsett is a frequent speaker at trade shows and blogs on Seeking Alpha, LinkedIn, Twitter and Facebook.