Are Bonds Still A Good Hedge? 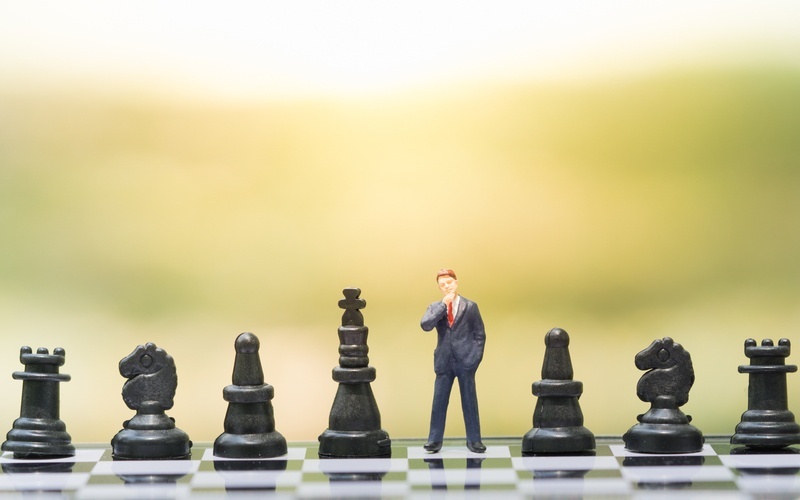 Investing in bonds is considered a conservative way to hedge your falling stock trades.. Analyst and long-time market commentator Mark Hulbert noted this week that despite this past month’s price action, bonds are still a stock market hedge against stock market losses.

Hulbert pointed out that this month’s steep market decline also saw bond prices fall as well, spreading worry that in the “new normal” bonds may not serve as the protection for the stock market as well as they have traditionally.  Hulbert believes that worry is unjustified, noting that while rare, the phenomenon of both stocks and bonds dropping in tandem is not unprecedented.  Since 1926, both the S&P 500 and intermediate-term U.S. Treasury bonds have fallen together 12.4% of the months, or an average of once every eight months.  Investors, he says, are being unrealistic if they “expect bonds—or any hedge, for that matter—to work every time, all the time.” 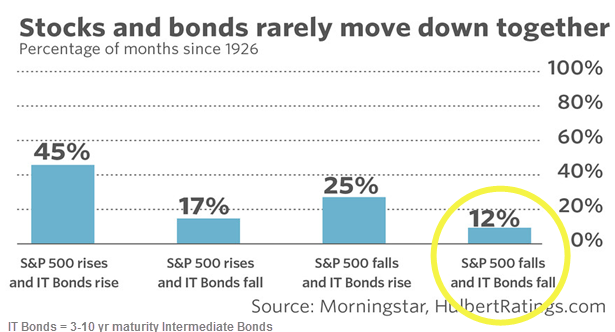 Hulbert believes that bonds’ potential as a stock market hedge has actually become greater as the 10-year Treasury yield has risen to around the 3% level. Compared to its below-1.5% all-time low from the summer of 2016, the current level gives the Federal Reserve far more room to lower interest rates in order to jump-start the economy in the event of a recession. So even while interest rates’ recent rise has caused bonds to lose value, that rise simultaneously has increased their potential to be an effective hedge against future stock market declines.

Hulbert's conclusion is that while investors owning a diversified portfolio of stocks and bonds are surely disappointed that both asset classes fell in value this past month, that is no reason to give up on bonds as an effective hedge against future stock market declines. Ironically, in fact, bonds’ recent performance increases the likelihood they’ll be a useful hedge going forward.

It's also well known that stocks tend to outperform bonds "over the long run", but the long run can be much longer than most investors realize. For example, since 2000, stocks didn't finally outperform bonds until mid 2017. Below is a chart showing VFINX (Vanguard S&P 500 index fund) and VBMFX (Vanguard total bond market fund). 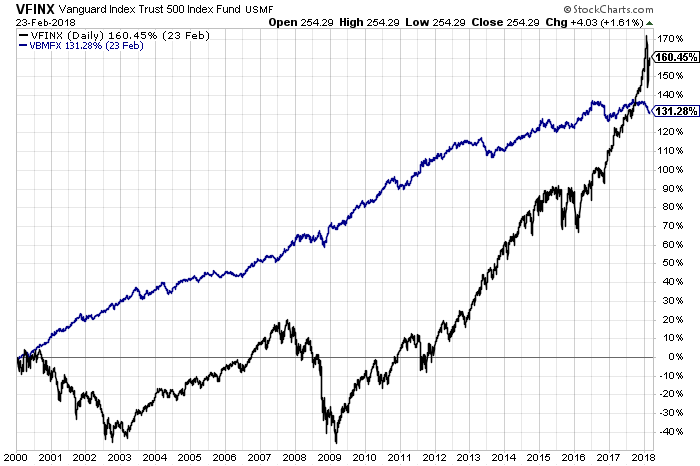 And of course, to only view the slight outperformance of stocks vs. bonds since 2000 would be unfair because it's easy to see how bonds had far less risk. We can take it one step further with Vanguard's balanced fund, VBINX, which allocates approximately 60% to stocks and 40% to bonds. The extremely simple and low cost baseline portfolio that remains difficult to beat. 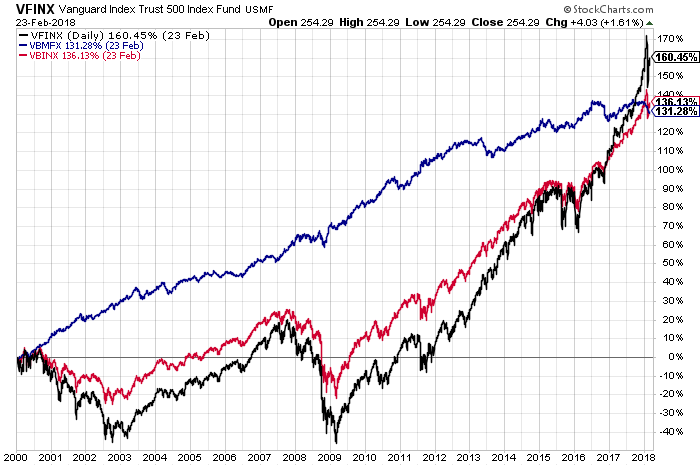 Diversification is a simple way of reducing regret, and both stocks and bonds still belong as the core to most investors portfolios due to their well documented risk premium. Cliff Asness of AQR Capital shares his witty wisdom in the following way:

But if an individual came to me and said, “What should I do?” I don’t say, “Pour your money into my fund,” because, for one thing, they don’t know that much and if we have a bad year they won’t stick with it. I tell them, “Study the history a little bit, just a little bit, and put it in the most aggressive mix of stocks and bonds that you wouldn’t have thrown up and left in the past.  And go to Jack Bogle to get it.”

Jesse Blom is a licensed investment advisor and Vice President of Lorintine Capital, LP. He provides investment advice to clients all over the United States and around the world. Jesse has been in financial services since 2008 and is a CERTIFIED FINANCIAL PLANNER™. Working with a CFP® professional represents the highest standard of financial planning advice. Jesse has a Bachelor of Science in Finance from Oral Roberts University. Jesse is managing the LC Diversified portfolio and forum, the LC Diversified Fund, as well as contributes to the Steady Condors newsletter.