Who Wants The Last Nickel? 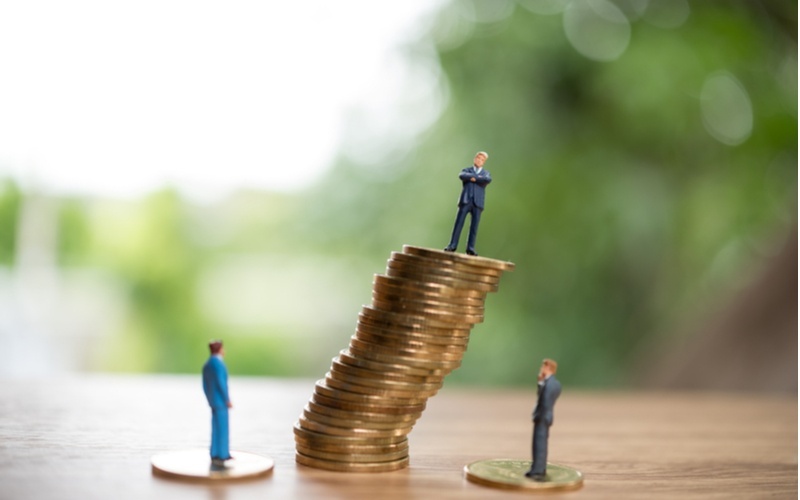 “The safest way to double your money is to fold it over and put it in your pocket.” Kin Hubbard. In this article I will discuss the reasoning behind buying back the short options and not waiting till expiration. Two of my basic trading tenets are related:

One of my difficult experiences as a CBOE market maker was suffering through losses that were the result of not buying back my short option positions when they were available at a ‘teeny.’ A teeny is 1/16, or $6.25 per option. Options did not always trade in decimals (decimalization began in 2000 and was complete by 2001), and for many years traded in fractions, with 1/16 being the smallest fraction.

It seems to be a true waste of money to pay $6.25 for an option that is ‘obviously’ worthless. And it is a lot of money. In fact, I used to joke about it on some Friday afternoons when I’d make a point of selling one option at 1/16, announcing that this was paying for my dinner tonight. *In the late 1970’s that price bought a decent dinner.]

Today, I’m horrified that this was my standard operating procedure. When an option reached a ‘teeny’ it was hopelessly out of the money and it seemed so foolish to buy it back. I clearly remember making a bunch of money when Jan 1978 expiration passed. I was short options that expired worthless. In those days, our account balances (net liquidating value) did not reflect that the options were worthless until Wednesday morning. Today, efficiency and powerful computers make that data available Sunday, or barely one day after the options officially expire on Saturday morning.

Thus, Wednesday after expiration was always a pleasant day. We may have earned the money earlier, but we did not have it to spend until the third business day following expiration. But I digress.

In February, I recognized a powerful income source when I saw one and had an even larger expiration day, collecting those residual teenies. March was better yet. I decided I was being foolish and went for a larger payday in April. Alas, April 1978 was not a good time to be short call options. That was my first significant loss.

Getting clobbered should have made it a simple no-brainer to cover those cheap options forever after. But life is not a fairy tale and it didn’t happen. I was caught again. More than once.

Today, I no longer play that game. I’m a firm believer in making my profits and letting someone else have the last few nickels on any trade.

Some people prefer to sell options and spreads that are very far out of the money. Yes, the premium collected is small, but those premium sellers believe the profit is guaranteed. It’s not. There’s always a chance of a major stock market event. Oct 1987 anyone? If you are a seller who collects a $0.25 premium, then I’m not suggesting that you pay $0.05 to close. I don’t know how to deal with positions that are sold for so little. I know when I sell call or puts spreads at prices near $1.50, I’m pleased to pay as much as 25 cents to get them back – depending on how much time remains. Today I’m always bidding something to bring those home. A waste of money? Yes it is. But not always. Every once in awhile those small buy-backs have saved me a bundle.

This is a difficult lesson to learn. Especially from someone else’s experiences. I had risk managers, trading friends, and clearing house presidents tell me how foolish I was. But I knew better. I scoffed, to my everlasting regret. Today, risk management is at the center of my trading and education methods. Near the top of must-do strategies is the idea that there’s just too much risk involved to go after the last nickel or dime. I’m happy to allow someone else to earn that profit.

I truly hope that you never suffer through the experience of having very low priced short positions explode in value. And when I say explode, I’m not thinking that the price may move from $0.05 to $1.00. I’m thinking of 10 x that number.

This post was presented by Mark Wolfinger and is an extract from his book Lessons of a Lifetime. You can buy the book at Amazon. Mark has been in the options business since 1977, when he began his career as a floor trader at the Chicago Board Options Exchange (CBOE). Mark has published seven books about options. His Options For Rookies book is a classic primer and a must read for every options trader. Mark holds a BS from Brooklyn College and a PhD in chemistry from Northwestern University.

If something thinks this is "theoretical", consider our JNJ hedged straddle from July 1, 2019: 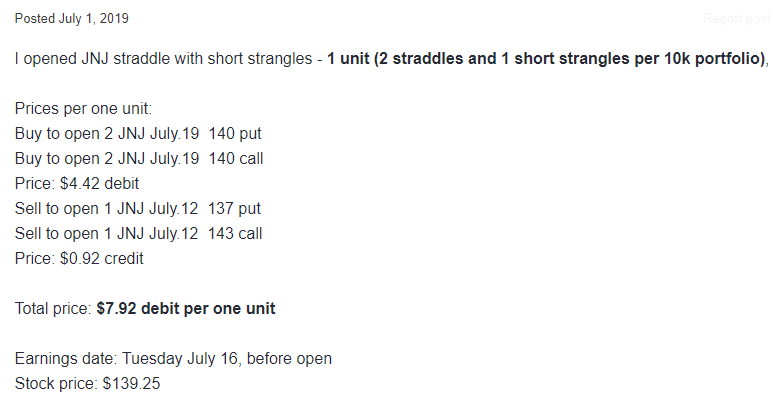 On July 11 we closed the short calls for 2 cents.

On the morning of July 12 (expiration date of the short options), the stock was trading at $139, and we closed the short 137 puts at 3 cents: 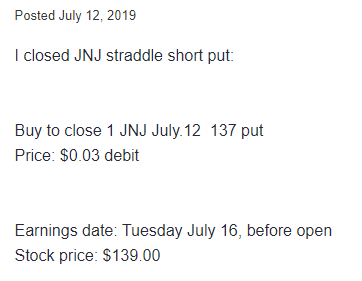 Some members questioned why we are closing puts that are $2 Out Of The Money and not letting them to expire.

Couple hours later, they got the answer: news about criminal probe broke, and the stock nose﻿-dived﻿﻿ below $133. Those 137 puts that we closed earlier for 3 cents were suddenly worth around $5! After getting rid of the "hedge", we were able to close the 140 straddle for 73.6% gain. 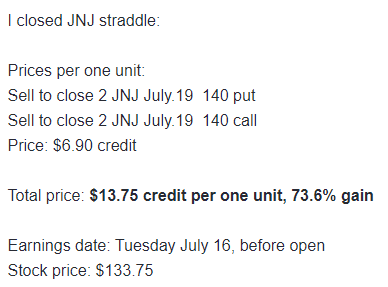 This is of course an extreme example, but you get the point. Trying to save the last few cents of the short options can backfire, big time. To many members, it was an eye opening experience.