There’s Volatility To Be Found….. In Turkey 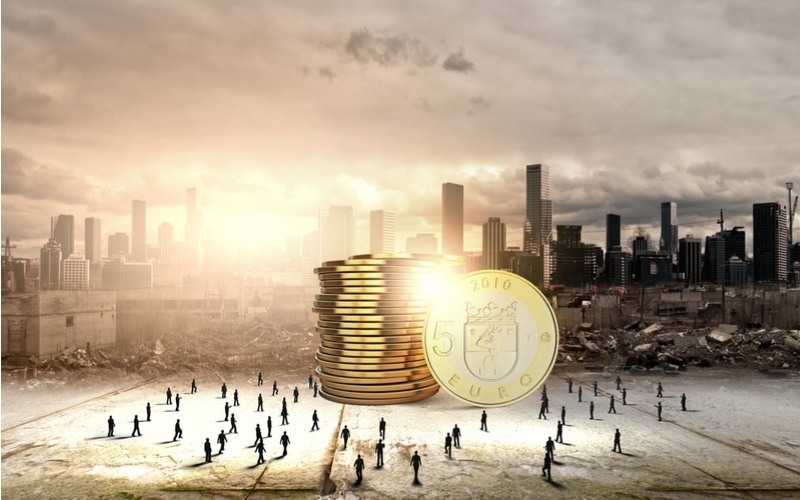 Since the correction in US markets from February to April, things have really quietened down since. Volatility is back to a 12 handle, stocks are rallying and all seems well with the world. The falling volatility is great for long term investors, but as options traders, we love high volatility and it’s becoming increasingly hard to find once again.

One ETF that caught my eye this week for having very high implied volatility is the Turkish ETF – TUR.

After bouncing 3% on Wednesday and then dropping over 5% on Thursday, this ETF has just hit a fresh 12 month high in implied volatility. So there is volatility to be found in this market after all. 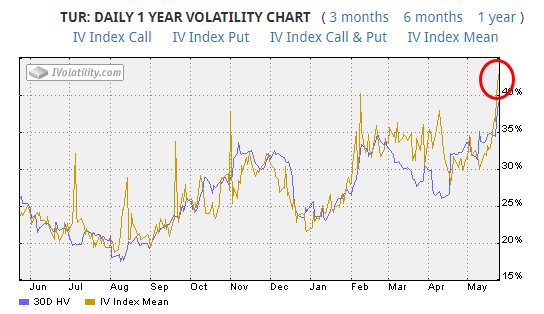 I tend to be more of a technical trader. I’m aware that there’s some political turmoil going on in Turkey and it’s certainly a risky place to invest. The Turkish Lira has been in freefall since late February and has fallen 28% since then. Ouchy!

According to Market Watch:

“On Wednesday, the Central Bank of the Republic Turkey raised its late liquidity window lending rate by 300 basis points on Wednesday, in a surprise move that put a halt to the lira selloff — at least for now. The lending rate now sits at 16.5%, compared with 13.5% before.

The central bank has been operating in a peculiar environment given that Turkey’s inflation has been hitting double digits and its currency keeps sliding to historic lows. Moreover, the government of President Recep Tayyip Erdogan has been critical of the central bank, calling for lower interest rates.”

On the technical side of the equation, we’ve got an ETF that is getting pummelled, dropping from near $47 in late January to just above $31 now. RSI has been hovering around 30 for the last few weeks and there was also a death cross back in mid-April.

So, we have political issues and a badly broken chart, but I do like the look of that high vol.

With that said, let’s look at a couple of trade ideas:

Poor Man’s Covered Call – This is one of my favorite strategies and one that I wrote about recently here. This trade is buying the 80 delta January 2019 call and selling the 36 delta August calls. Risking only $645 for a potential profit of nearly $350 is not a bad risk reward ratio. Particular as the breakeven on the downside is just over 5% below the current price. 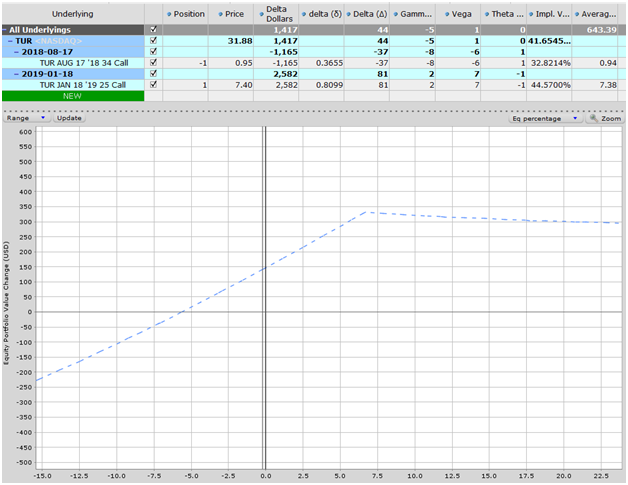 Cash Secured Put – This trade is shorter term to try and take advantage of the accelerated time decay. Being cash secured a trader would need to have $3100 set aside in case of assignment, so the return potential in percentage terms is not nearly as good. But, the trader could always roll out to the next month to avoid taking assignment. 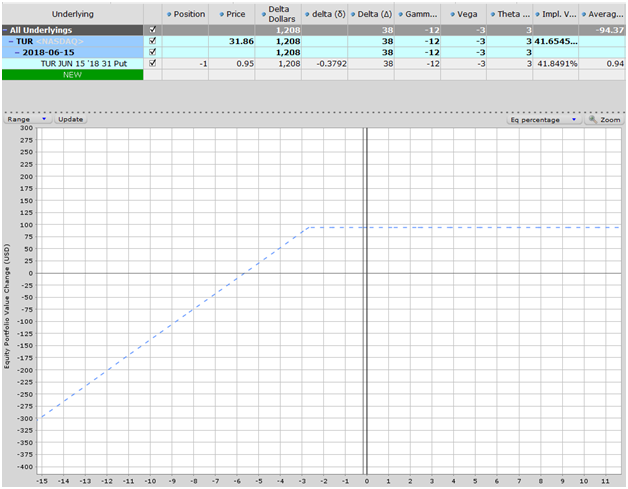 Short Straddle – With high volatility the premiums are quite juicy, so traders how prefer a neutral stance can generate some good income if they think the stock will stay flat and volatility will drop. Earlier in the week I shared the results of a delta neutral option strategy using a short straddle with a delta hedge. The delta hedge ended up costing me money but it did means less price risk. Looking at the June options again in this example to take advantage of the higher rate of time decay. This trade starts delta neutral, so it would be up to each individual trader whether or not to delta hedge. 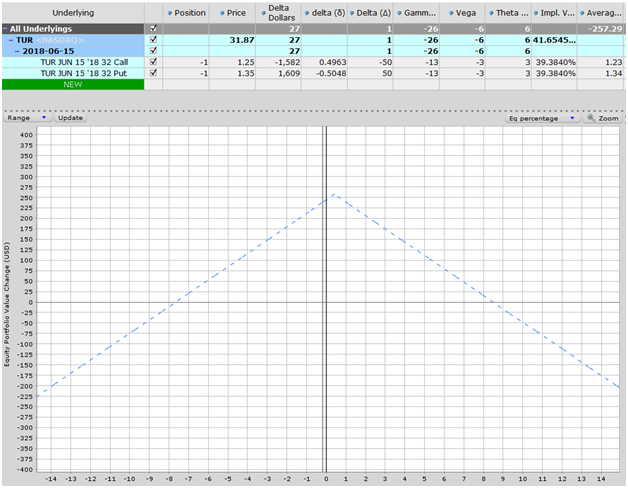 Bear Call Spread– Traders thinking that the woes will continue for this ETF could trade a bear call spread. Using the July 33-34 spread gives traders the chance for a 53% return on capital with a 6% margin for error on the upside. 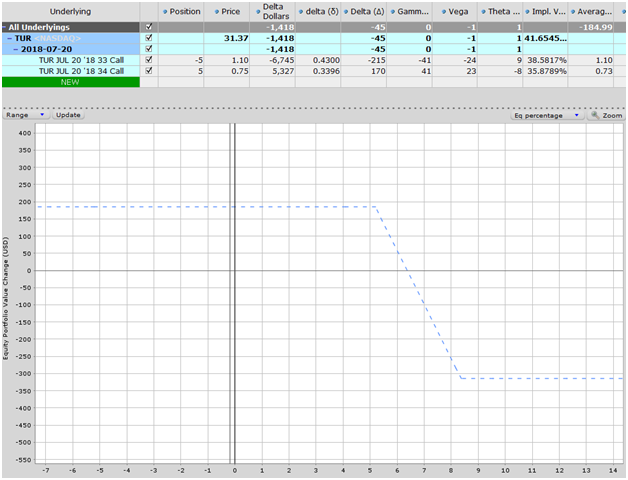 Whatever your opinion, there is always a way to express it via the options market and these are just a couple of examples. Either way it’s sure to be an interesting couple of weeks for this ETF!