The graphically named “gut strangle” is a seldom-used strategy, but it might work in some circumstances. This involves trading in-the-money calls and puts. A long gut strangle is set up by buying both options; and a short gut strangle calls for selling both sides.

This approach will work if you believe that profits will accumulate when you work with in-the-money positions rather than at- or out-of-the-money ones. For most traders, this long shot keeps them away from the “guts” and sets up a preference for the less expensive long or less risky short forms of strangles.

These can be opened in either configuration whether you own stock or just want to work with options. 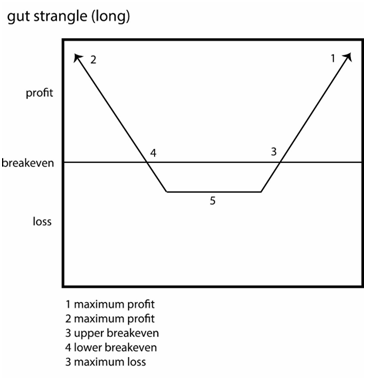 A long gut strangle is the purchase of an ITM call and an ITM put. The idea is that either side needs to move enough points to exceed the cost of the options.


It is typically opened when you expect a big move but you’re not certain of the direction. For example, a stock tending to move a lot after earnings surprises may jump higher or fall lower, and a surprise is expected. The long gut strangle is a gamble because you will need many points of movement, but it also can pay off in a big way if the move takes place.

This sets up unlimited profit potential along with limited risk. A profit occurs when price moves more than the total cost to open the position:

The gut strangle will break even in two circumstances:

The risk in the long gut spread is limited. It occurs when the underlying price ends up in between the two strikes: 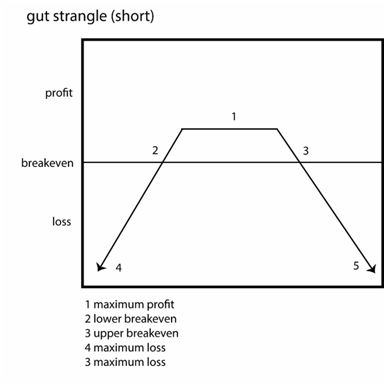 A short position is set up by selling a call and a put, both in the money.


This version establishes limited profit with unlimited risk. It is the opposite of the long guts because both profit and loss are flipped.


With the sale, you receive the net premium for the two in-the-money options. This is the appeal of the short gut strangle. However, you also have to ensure that collateral is posted in your margin account for both options. Depending on the strike, this could be an inhibiting number.


The short gut strangle is an oddity. The short put has the same market risk as a covered call, but the short call is a high-risk position. It combines low-risk and high-risk in a single strategy.


The limited profit is equal to the net premium received, and it occurs when the underlying ends up in between the two strikes:


Maximum risk can be substantial and is unlimited. It occurs whenever the underlying moves above or below the strikes and exceeds premium received:


This can be modified away from the strangle and set up as a straddle, but more important than this is the analysis of potential profit or loss overall. The gut strangle is rarely employed because profits are difficult to earn and risks are difficult to overcome. Even so, it deserves consideration in the range of possible options strategies you could deploy.