Academic research refers to the persistent phenomenon of ex-post implied volatility (IV) exceeding realized volatility (HV) as the Volatility Risk Premium (VRP). As it applies to option premiums, this leads to a positive expected return for being a systematic option seller.

This can be seen in historical market data, and from an efficient markets point of view, should be expected to persist in the future as a rational risk premium for the transfer of risk from a willing buyer to a willing seller.

Stop and think with me for a moment about the concept of passive vs. active. I believe it's wise to only invest in strategies ("factors") with an underlying expected return, before any active management is applied. In other words, the market naturally makes you money over time without any requirement of an investment manager's "skill" to be able to select securities and/or time entries and exits. This is important because academic research has documented manager skill in decades of historical mutual fund performance to exist less than would even be randomly expected (especially after fees and taxes).

As an example of a passively managed VRP strategy, the CBOE has been publishing their S&P 500 Put write index for years, with historical data going back to 1986. Since then, a passive strategy of selling fully cash secured one-month at the money (ATM) S&P 500 puts, with collateral assumed to be held in a money market account holding US Treasury bills, would have produced returns similar to the S&P 500 index itself. Due to the nature of ATM puts, risk (measured as volatility and drawdown) was less than the underlying index, resulting in about a 30% increase in Sharpe Ratio. 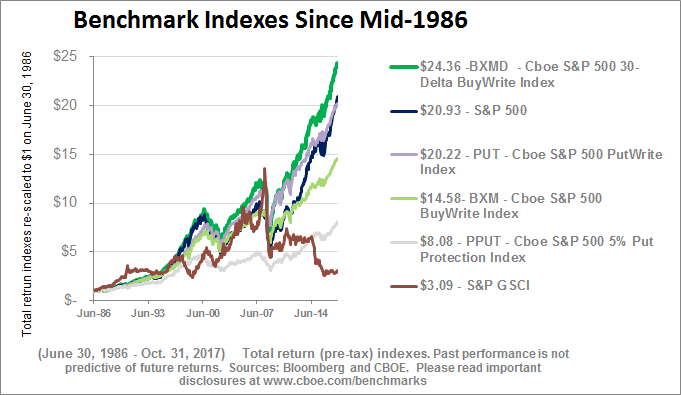 Put selling is robust across markets as well, as can also been seen in CBOE's historical data for PUTR, where the same methodology is applied to the Russell 2000 index. With liquid option markets on ETF's like EFA and EEM, a globally diversified equity put write strategy could be constructed with attractive characteristics vs. a traditional mutual fund or ETF that only holds the underlying equities. (Readers can backtest these ideas for free for an entire week with a free trial of the highly recommended ORATS Wheel) 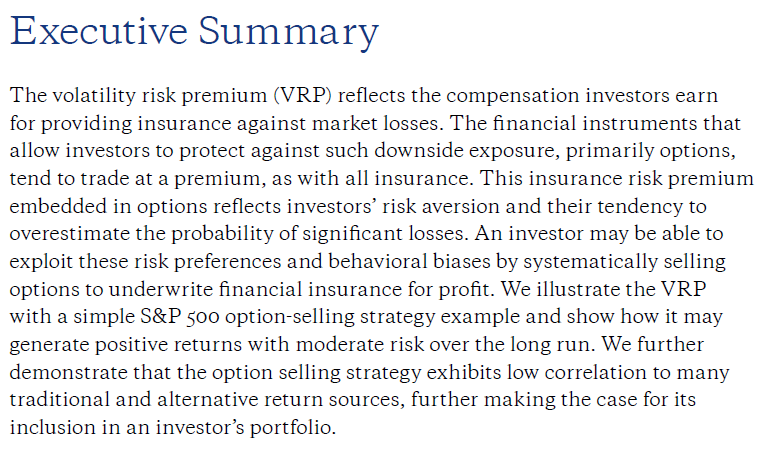 The authors also present an interesting case study of how investor behavior tends to create significant demand for and value placed on insurance like investments, such as buying puts to hedge a position or portfolio. These preferences and behavioral biases cause an overestimation of downside risk, documented by a Yale University survey conducted where both retail and institutional investors were asked to estimate the probability of a "catastrophic stock market crash" within the next six months. Since 1989, with few exceptions, a majority of both groups consistently believe that there is a greater than 10% chance of such, yet in reality the historical likelihood of such an event has been approximately 1%. This overestimation of crash risk may be part of the explanation of the persistent VRP seen in option and volatility futures pricing where option and volatility futures buyers are willing to pay, and sellers require receipt, of a large premium to transfer risk from one party to another.

On the opposite end of the option spectrum is call options, where the VRP has also been documented to exist (and can be seen in CBOE's BXMD index in the chart above), although for slightly different reasons. Call options can be thought of as lottery tickets, where a buyer spends a small amount of money to have the potential for a large payoff if the underlying asset moves much farther and faster to the upside than the market expected. This preference for positive skew results in a call option VRP that can also be captured by option sellers in a variety of different ways, including covered calls and short strangles where short puts and calls are combined into one (usually) delta neutral position.

I'll finish with the conclusion from AQR's paper, but before I do, a word of caution. The reason you often hear "options are risky" is because people often are under-educated about the inherent leverage built into options. Remember, one contract is the equivalent of 100 shares of the underlying. Don't rely on your broker's margin requirement as any indication of how many contracts you should sell any more than you'd rely on a sports car's ability to drive 180 MPH as any indication of how fast you should drive. In our firm, we believe that any skill that may persist in financial markets is in having a deep understanding of portfolio construction, and then the discipline to have a long term mindset when most others don't. 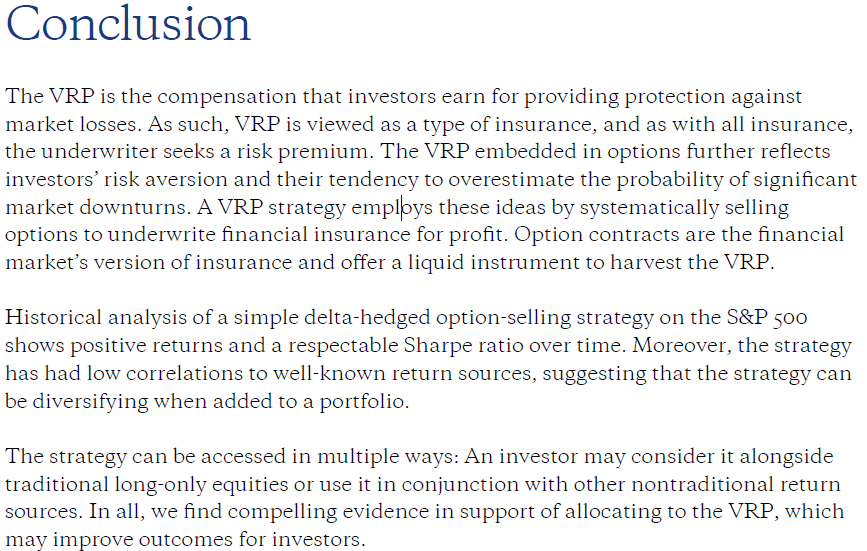 Jesse Blom is a licensed investment advisor and Vice President of Lorintine Capital, LP. He provides investment advice to clients all over the United States and around the world. Jesse has been in financial services since 2008 and is a CERTIFIED FINANCIAL PLANNER™ professional. Working with a CFP® professional represents the highest standard of financial planning advice. Jesse has a Bachelor of Science in Finance from Oral Roberts University. Jesse oversees the LC Diversified forum and contributes to the Steady Condors newsletter.